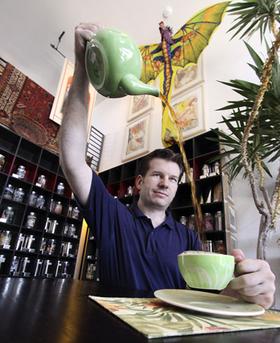 David Edwards has encouraged his customers to support entrepreneurs in the developing world with microloans through the nonprofit Kiva. He never thought he might one day use a similar strategy for his own company.

Edwards owns New Mexico Tea Co. near Albuquerque’s Old Town. It sells a wide variety of bulk loose leaf teas. When his bank turned him down for a line of credit recently, he turned to the loyal customer base he has built over four years. He sent an e-mail to the 3,800 people on his newsletter list in an effort to raise $5,000. Within about 48 hours, he had raised $10,000, made up of $4,500 in “microloans” and $5,500 in gift cards that can be redeemed starting in December for slightly more than their cost. “You don’t really know how much the community cares about you until you ask for help,” Edwards said. “Most of them had never done anything like that. But most had never been asked.”

Expansion that doubled the company’s space for a tea bar and café earlier this year had cut into revenues during the busier winter months. When the slower summer season came, there was enough cash coming in to cover the bills, but not to order more tea. The generosity of his customers has infused the business with a new energy, said Edwards and his business partner, Dianne Edenfield. The two were busy this week re-stocking the shelves and they have freshened up the two-level, 700-square-foot store at 1131 Mountain Rd. NW with new paint and reorganized space.

The extra funds will allow them to pay in advance for tea from vendors, giving them more cushion if there is a cash crunch again. It also allows them to stock more tea, teapots and other tea-themed accoutrements.

The next order of business is to launch a tea club for $10 a month. Edwards is still tinkering with the structure, but it will give members two ounces of special tea every month and access to the upstairs space to have tea, use Wi-Fi, read and relax.

Edwards is optimistic that it could bring more people into the store and reinforce the idea of community at the heart of his alternative financing plan. He uses Facebook, Twitter and his monthly newsletter to build that community. He spends a lot of time talking tea with customers. It’s Edwards’ excitement and shared passion that made Dennis Plummer a loyal customer and prompted him to buy one of the gift cards. 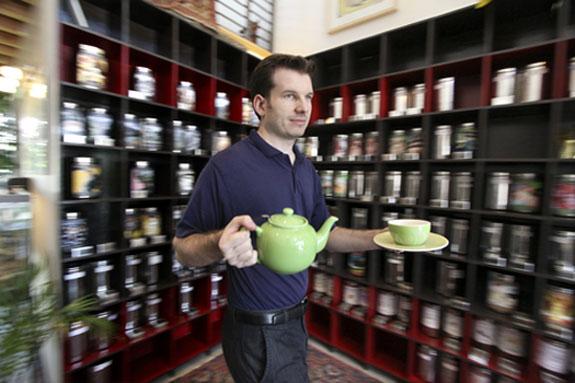 “They know each of their customers when you walk in the door, which is a really nice atmosphere to shop in,” Plummer said. “They also have a good sense of knowledge of the tea and are willing to learn more and find out more.”

Another customer who lives down the street gave the company a $1,000 loan within 10 minutes of getting Edwards’ e-mail. She did not wish to be identified, but explained she was looking to invest part of her tax refund and the 10 percent interest rate Edwards was offering sounded pretty good.

“I thought it was such a creative solution,” she said. “It seems so often in our culture that to admit a problem is a sign of weakness. I think it’s a sign of strength to look for alternative solutions and be honest about difficult times.”

Edwards is not accepting any more loans, even though one customer offered $2,500. “We had met our goal and I didn’t want to get too much in debt,” he said. But he will continue selling the gift cards through August. They sell for $50 and $100 and can be redeemed starting in December for $55 or $115, respectively. Edwards said he might make the gift cards an annual tradition. Many people are using them as a sort of holiday layaway plan. New Mexico Tea Co. has seen a steady growth rate of 30 percent, Edwards said, and that’s mostly from new customers.

The store’s expenses will drop by about $2,000 in August when its six-month lease for its additional space ends. The expansion was an experiment, Edwards said, that allowed the company to try out a café and tea bar. It convinced the partners not to pursue that idea because of the cost and time involved.

The store will start repaying the loans to its generous supporters in December. The decision to reach out to them was a last resort, Edwards said. But it might be his first choice next time.

“I’d rather pay my customers back with interest than the bank,” he said. “Why not put the interest back into the community?” Last year, another local business used a similar strategy and it worked well. Bea Doyle, owner of Bhava Yoga Studio, was facing a cash crunch and turned to her customers.

Many bought year-long memberships and vowed to bring in friends to try the classes. She also added a slate of $5 hour-long classes that are now packed and keep a steady stream of people coming into the studio. She invested in a computerized sign-in system as well that lets people purchase classes online, which has helped keep a steady flow of clients coming in. “We still need to continue to build, but I’m breathing a little easier,” she said.

More small businesses are exploring options to bank financing, said Jeff Milchen, co-founder of the American Independent Business Alliance. That can take the form of microloans or gift cards. Some communities have even formed community-owned businesses, such as grocery stores. And more are doing bartering as a way to cut costs, Milchen said.