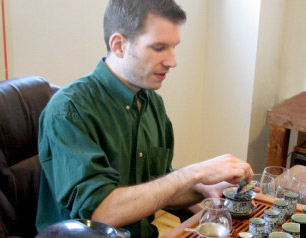 New Mexico may be more known for its red and green chile, but David Edwards took an alternative path by starting a tea company with business partner Dianne Edenfield in 2006. And when the down economy and several unfruitful business decisions put New Mexico Tea Company in a bind, Edwards took an unusual route once again.

This July, Edwards realized he had to raise $5,000 quickly or shut down the Albuquerque tea shop. But he didn't panic. Instead, he got his customers to help invest in his business. Edwards' creative microlending solution offers plenty of lessons for other small businesses that find themselves dealing with a cash flow shortfall.

Why did you decide to start a tea company in New Mexico?

To me, it seemed very obvious that if you are going to do something, you should do something that other people aren't doing. Tea is such a big industry worldwide. People in New Mexico think I invented the tea industry because I'm their first experience. If I was living in San Francisco or New York or Toronto, I probably couldn't have opened this because there would be so many people already doing it. It's one of the great opportunities that New Mexico provides. You don't have to make a million dollars a year to be successful here.

Why did you add the tea bar last year?

As soon as we opened, people said we should serve tea. The two are quite different businesses. It did allow us to tap this new audience, but it wasn't that beneficial to us. We doubled our expenses, but it wasn't doubling our revenue. We did it for a year. It turned into something that was taking all the time and money. People loved it, but it was taking away from the focus of the store, which ultimately led to our predicament.

How exactly did you get into your predicament?

All retail is seasonal. We see much more business in winter, partly because it's cold and also because of Christmas. Everything is in December for us. Last summer, my answer to slow sales and dwindling revenue was to start to serve tea. We weren't paying ourselves. We let our expenses get out of hand. We had five employees, and I wasn't saving any money. When this summer came around, we had shut down the tea bar, but we were still paying rent on it.

All those things came to a point in July. We had people coming in and buying tea, but [the revenue] was only going toward expenses. There wasn't anything left to buy more tea. We would have been dead in the water. I looked at a line of credit, but the bank declined us. An SBA-backed loan would have taken a few months and we needed money that week.

How did you hatch the idea to do microlending?

Am I going to get one person to give me $5,000? Probably not. I had already known about microlending as a concept from Kiva. Microlending is so interesting because it's an actual investment. The levels that people could participate at were $50, $100, $500 and $1,000. To borrow $50 from 100 people would have been a nightmare in terms of paying interest and keeping track of it. That's where the idea for gift cards came into effect. The gift card is worth more than they bought it for. At $50, it's worth $55. At $100, they get 15 percent interest, so it's worth $115. The trade off is that they can't use it until December. For the larger amounts, it's a traditional loan and repayment at 10 percent interest starting in December with payback over six months.

What was the response?

I did it through PayPal so people could just click a button. Within five minutes of sending the newsletter out, someone had given me $1,000. Two days later, I had already met our goal. It was incredibly positive. It was everyone coming together, understanding the situation and offering their support. A lot of customers who weren't in a position to do this came in and bought tea, which helped.

Was it hard to ask your customers for help?

Of course, because you never want to admit that you're struggling. My customers knew me for the last four years. That's how community and microlending are successful where a bank is not. A bank just looks at the numbers. I'm optimistic that I will be able to pay everyone back in December, even though I have six months from December to do so.

Do you have any tips for other businesses when it comes to do-it-yourself microlending?

First, you have to be humble. It was my customers who made it happen. They are the ones who should be commended. You have to build a community over a long time that is willing to do that for you. Make it a good investment for them. Giving something back is important. One of the reasons that we have 4,000 people on the e-mail list is that I give away a free tea sample to each person every month. You have to give without the expectation of receiving. I didn't give people tea with the plan that some day I would need to borrow money.

What are your favorite teas?

I drink Earl Grey all the time with cream and sugar. That's usually in the morning. For oolong, I like Ti Kwan Yin. For green tea, I like Dragon Well and some other Chinese teas. One of the things that makes me an appropriate person to own a tea store is that I like all tea. I'm not obsessed with any one tea.