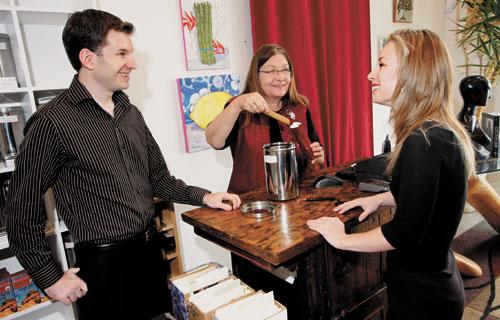 David Edwards knows the power of "free." As in: Tall glasses of fresh-brewed iced tea given away at the Downtown Grower’s Market. A free ounce of bulk tea with each issue when you sign up for a monthly tea newsletter. A tea tasting of eight different brews at no charge that you can attend with as many as five friends. And a no-subscription online resource for everything-you’ve-always-wanted-to-know about anything that has to do with tea.

Those are just a few of the methods Edwards, an enterprising 27-year-old with a background in graphics design and a knack for the entrepreneurial, has employed to promote the New Mexico Tea Co., a two-year-old bulk tea business he opened with his mother, Dianne Edenfield, in the fall of 2006.

“I love to give stuff away,” says Edwards, who previously worked for Home Depot and as a cruise ship activities director, before realizing his business acumen was going to waste working for others. “People’s faces light up. It creates an excitement around the name, whether they end up coming in to the store or not.”

Edwards says he operates on the “tithing principle” — that whatever you give away will eventually come back to you — and Edenfield agrees. She had originally planned to open an incense and card shop in Old Town by herself after working for the University of New Mexico Press for 14 years. But after meeting with a local incense supplier who furnished her with a plethora of free samples and “set me on the track of the spirit of generosity,” she instead decided to embrace her son’s vision for the tea shop.

“David’s philosophy is to give away the best value you can and not cheapen it,” says Edenfield, who handles the “artistic end” of the retail store, at Mountain Road and 12th Street NW. “And that philosophy is carried through our whole shop. It is an act of generosity, rather than a marketing ploy.”

If giving things away seems like a strange way to go about building a business, it’s no more shocking than the other business rules Edwards and Edenfield have broken in becoming first-time entrepreneurs. When they began, they had no business plan, no backers, no capital (Edenfield charged the $20,000 in start-up costs on her credit cards) and insufficient funds to pay their second month of rent. To this day, they’ve not done a single bit of traditional advertising.

Moreover, their tea shop is not even in the business of serving tea — its focus is on selling loose-leaf bulk tea only. Still, revenues have almost doubled in the second year of operation and about 200 customers a month — half regulars and half new acquaintances — are now coming through the doors.

Six months after opening, the business debuted an information-packed, graphically sophisticated Web site Edwards designed that has expanded its online presence; outreach to wholesale customers like restaurants and cafes followed soon thereafter. Edwards’ goal is to make each of the three aspects — brick and mortar retail, online retail and wholesale — account for a third of the store’s revenues, though he admits that, right now, 90 percent of his business is in-store sales.

But he is optimistic about the opportunities for future growth in all areas.

“I think the tea industry right now is where the specialty coffee industry was 20 years ago,” he says of pre-Starbucks days. “And I feel we’re in a comfortable position because we’re ahead of or on top of that wave.”

But Edwards and Edenfield are hardly coasting. They admit getting their endeavor off the ground has been challenging; it continues to demand most of their time and energy. With the store open seven days a week and no employees, at least one of the two is always at the shop between 10 a.m. and 6 p.m. daily. There is a constant effort to create name recognition and expand the customer base.

Take that newsletter, for example. Sign up online (www.nmteaco.com) and you receive a free ounce of bulk tea (there are 140 types to choose from) when next you visit. Edwards tracks every newsletter customer — and knows there are a few who come in each month for nothing but the free ounce. But that’s OK, he says, because it is still another foot in the door and another mouth to spread the word.

“I think a lot of [business] people get so wrapped up in the bottom line, they won’t take the risk and trust the customers to decide for themselves if they want to support the company,” he says.

That freedom of choice also extends to Edwards’ and Edenfield’s attitude toward any customer’s purchase preferences. From the outset they envisioned a business free of the elitism often associated with tea-drinking — a place not based on Asian or English tea tradition, but one that was strictly American.

“We didn’t want to be ‘fake’ anything,” says Edenfield, “or to present a snob culture. You can drink your tea any way you want it.”

That’s not to say you can’t learn all about the rich historical and botanical traditions of tea from the company’s Web site, and from the owners themselves. They’ll supply anything from recipes for dishes made with tea to an online video on proper brewing for decaffeination. Edwards also provides Friday night tea tastings by reservation that incorporate traditional ceremonial processes.

Edwards is an encyclopedia of tea knowledge and uses social networking sites like Facebook and My Space, as well as a blog, to get his message across. That’s just another strategic move he foresaw from the outset.

“In the late ’80s, there was what I call the ‘mall mentality,’ in this country,” he says. “But I think there’s a shift now to specialty stores. People want to buy products from someone who knows what they’re doing and selling.”

Along with the specialization is an emphasis on the local. Though the tea plant (that all tea comes from one plant is just one of the interesting facts Edwards supplies) is not grown in New Mexico, the herbs that make the brews, called tisanes, are. And the New Mexico Tea Co. carries some from Datil and Jemez Pueblo. The store also sells local art and pottery and is partnering with Glazed Hams and Moreanother Albuquerque business, to create gift baskets with local products.

The company supports the Sandia High School Tea Club and, in the future, hopes to do outreach in rural areas of the state to educate up-and-coming tea consumers. It’s all part of Edwards’ and Edenfield’s determination to project an image larger than the small business they presently are.

“No matter how small you are, never act small,” Edwards advises. “You want to project an image of how you want people to see you.

“My goal is that when someone thinks, ‘I want something tea-related,’ they think of the New Mexico Tea Co. I want people to see us as the premiere tea shop in the state.”