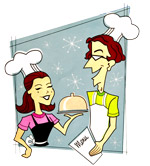 ATM: How did you get involved in the tea industry?
Edwards: I really wanted to work for myself. At the same time, my motherdecided she wanted to open a card shop, and she wanted me to do thebusiness side of it, I thought that a card shop wasn't unique enough,so the idea of tea came about. I always liked tea and didn't really knowmuch about it, except that I liked it.

ATM: What’s your mission?
Edwards: To educate people about tea, and provide something that'shard for people to get here. Tea doesn't grow in the United States atall, especially not commercially, so all the tea comes from China, India,Japan, Africa, South Africa, and places like that. Before, a lot of peoplewould have to order their tea online, and now I can satisfy that need.

ATM: So what flavors do you offer?
Edwards: With flavors of tea there's an innite amount that you canhave: Earl Grey with black tea, Earl Grey with green tea, Earl Grey withwhite tea. We don't have every combination, but we have the four maintypes of tea: black tea, white tea, green tea, and oolong. They all comefrom the same plant. They are the true teas. Then we have our selectionof herbal teas as well, the rooibos, and the Chamomile and spearmint,and all those sorts of things.

ATM: What are the benefits of drinking tea?
Edwards: One is that you can come at it from so many different angles.Some people get into the spiritual side of drinking tea, and others getinto the health benets. Other people just drink tea because the caffeine helps them wake up in the morning. Others like the ceremony of it- the English-Victorian style with the scones and all of that; dressing up and tea parties. It's the most consumed beverage, after water, in the world.

ATM: What's the biggest myth surrounding tea?
Edwards: People think that a box of tea is all there is, when there's awhole world of teas out there. Another misconception is that tea is justfor women or tea parries, or for being fancy- and there is that aspect, butthere's also the construction worker that drinks black tea, or thereghter.

ATM: What prompted the idea of adding the cafe to the store?
Edwards: Since day one, people have asked, "Do you serve tea in yourlittle back patio?" And, nally, I've gured out a way to do it. We havean employee now, so that makes it feasible. The tea store has been retailfor two and a half years, and it will always be the heart of it- and theservice will be the addition. I'd like to think that the store is an elegantexperience, my goal is to make it elegant for anyone to enjoy.

ATM: What’s your favorite part about what you do?
Edwards: I'm fascinated with the business side of tea. I enjoy orderingthe teas, selecting which teas we should have, talking to people abouttheir tea, selling the tea. Even more than just drinking tea- specicallyin the store- what's so great is we have customers who come in and theyreally don't like tea. Once they realize what tea is, then they get excitedabout it. Introducing someone who's enthusiastic to the world of tea isprobably the most enjoyable.

ATM: What's the proper way to steep tea?
Edwards: There's a way that it is traditionally done, and then the waypeople like to do it. Some people like more bitterness, some like asmooth tea. As long as you learn the ground rules, then you can controlsteeping the cup of tea you want. So, green tea: you use less-than-boilingwater. Black tea: you use boiling water. The water temperature is the mostimportant thing, and the thing that people most often get wrong. A lotof people will say they don't like green tea because it tastes too bitter.One of the reasons that it's so bitter is because of the water temperatureis too high. If you use the proper water temperature, then you can steepit the whole time, which is about two minutes. There are two factors tocontrolling the bitterness: one is the water temperature, and the secondis time. If either of those are wrong, then you'll get a cup of tea thatdoesn't taste great.

ATM: So what tea pleases your palate?
Edwards: The tea that I drink the most of is Earl Grey with milk andsugar. In the summer, it's this blood orange iced tea, which is a rooibos,so it's caffeine free. You can drink as much of it as you want withoutgetting dehydrated and without staying up all night.